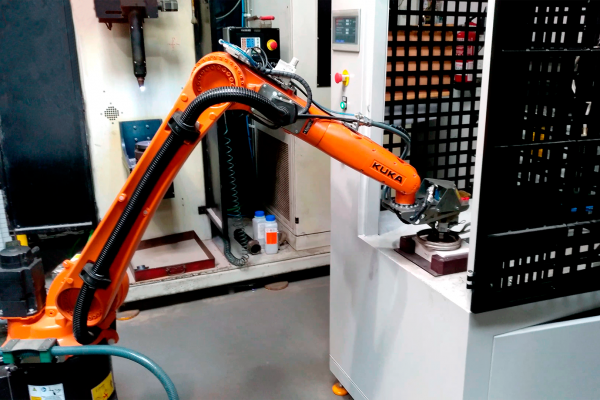 The company in question wanted to improve the production process by replacing the repetitive work of an operator with a machine that would carry out this function more safely and efficiently, restructuring him in the quality and parts review department.

One of the requirements was that the system should operate fully automatically at the operator’s indication and that it should also offer the possibility of operating in manual mode (without the robot’s intervention). In this one, the system allows the operator to work manually with the furnace and the welding machine.

At the beginning of the project, the company had a welding machine that did not have the entrances and exits necessary to work by itself without the help of an operator. For the execution of the project VOLTEC Electrosystems has been required for the mechanical, electrical and control updating of this machine for the communication with the anthropomorphic robot that will be in charge of carrying out the tasks that until then were done manually. In this way, it automates a process that previously required up to 6 movements of an operator to perform the semi-finishing process of a piece.

The robot – with a load capacity of up to 8 kg and a movement of 6 axes – collects pieces individually from one of the three automated loading columns and has to introduce them into an electromagnetic induction furnace to heat them to approximately 400 degrees. Once they have been heated, the robot will transport them to a material-filling machine (” plasma-welding machine “). At the end of these phases, the parts must be left in a container containing vermiculite (sand type cooling material) for slow cooling.

The new induction system replaces a manual system with a small furnace, and in just over a minute can heat the piece from ambient temperature to about 400 degrees. When it reaches the required temperature, the robot is warned and can pick it up.

With the new process, the operator simply fills the loader columns with the pieces coming out of the lathe. The autonomous operating time changes depending on the batch and the number of pieces that are introduced into these columns, but the cycle time per piece is estimated at about two minutes, improving up to 75% the time previously required in addition to the operator time, thus obtaining a better performance.

In order to optimise the process and make better use of production times, while one part is inside the weld, the system places another part in the induction furnace, where it awaits the completion of the welding cycle.